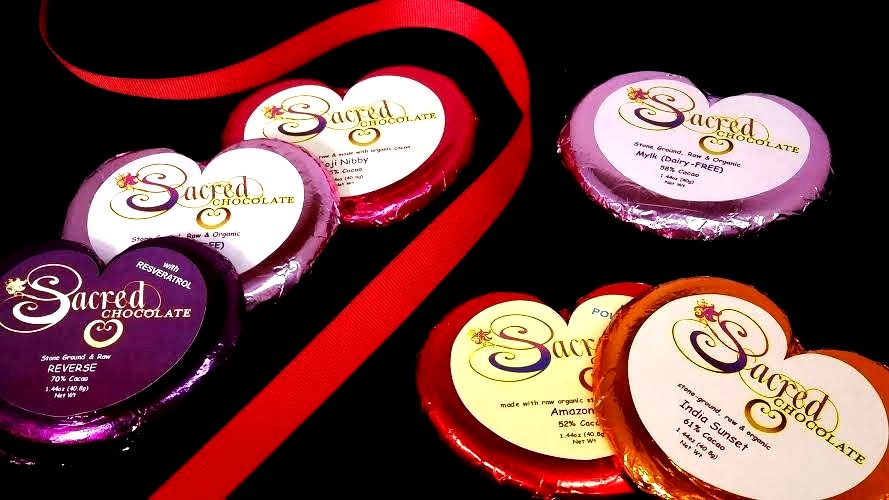 TRUE CONFESSIONS:    Six years ago I became a confirmed Chocoholic.  It happened when I began to grasp the medicinal scope of this heavenly substance.  And when my neck inflammation “melted” after 30 years of whip-lash injury suffering ….well I was “in” with Chocolate.  Who knew?   In its raw and powerful form, Chocolate is a Natural Medicine from Central & South America, and its use has been documented for thousands of years.   Modern science is uncovering the reasons.

Yes, I have plenty of personal healing stories of my own… and others with whom I’ve worked.   On a few occasions, I’ve seen people reverse serious pain or allergy issues within an hour of consuming what the Mayans called the “Food of the Gods”.

“Did you know that the cacao bean is the most revered of all rainforest foods?   Cacao is the most pharmacologically complex food source in the known Amazon jungle, containing an estimated 1,200 individual chemical constituents (according to Joel Brenner’s research in her book “The Emperors of Chocolate).  This complexity is why chocolate cannot be synthesized artificially.”

WHO IS DAVID WOLFE?

David “Avocado” Wolfe is a superfood expert.  He teaches at the New York Institute of Nutrition, other educational venues, and speaks on the topic of superfoods and anti-aging at national conventions.  He is a self-proclaimed Renegade Chocolate Pioneer.  Back in the mid-90’s, when people thought it was crazy to think chocolate could be “good for you”, David was uncovering the science and blazing the way for the rest of us.   I encourage you to watch his TED Talk on YouTube.

How does this relate to you?  Well, if you like the idea of good-for-you dark, raw chocolate, you will love David Wolfe & Steve Adler’s raw chocolate creations at their company, “Sacred Chocolate”.  We now carry these pure-ingredient, superfood and nutraceutical chocolates at Lotus Blossom Clinic.  You can order them online thru our website as well.  Click on the big chocolate at bottom right.

Being trained in the phytochemicals of specific foods and their affects upon our health, I also know many of the health dangers out there in our food supply.   So, I’m a label reader.   People often comment on the fact that, although I’m in my 60’s, I don’t need reading glasses and can often read tiny print on labels.   Six years ago, I was starting to wear “cheaters” to read at night when my eyes were tired.  By now, I should be wearing them to read all the time.   What changed?

One of raw cacao’s most well-studied effects is cardiovascular health improvements.  How does that relate to the eyes, you ask?   Each eye has a single blood vessel feeding it.   As I consumed medicinal chocolate on a daily basis, the blood vessels became healthier, and blood flow to my eyes increased.  Add to that improved blood flow all the nutrients which nourish and protect the skin (the B vitamins, anti-oxidants and sun-protective components of cacao), and those of us who consume chocolate daily tend to have a certain “glow” about us.   And, big bonus, the pre-cancerous skin growths no longer appear….they haven’t done so for 6 years.  Coincidence?  I think not.  Clearly, keeping your cardiovascular system operating at maximum health, and including natures highest antioxidant food source on a daily basis, has both visible and invisible (inside) benefits.

Over 85% of Americans today are said to be mineral deficient, and one of the most important minerals is Magnesium.   Raw Cacao contains many minerals, among them are copper, zinc, iron (wonder why women crave chocolate when they are menstruating?), manganese, calcium (this kind does NOT cause kidney stones!)…. and therapeutic levels of this critical mineral:  Magnesium.

YOUR HEART IS A BIG MUSCLE

Many of us know that magnesium is great for our muscles.  Having adequate amounts of it keeps our muscles firing normally.  We commonly see malfunctions with magnesium deficiency which can show up as the pain of Fibromyalgia, cramps during/after exercise, and restless leg syndrome.  And magnesium deficiency becomes a whole-body concern when it affects your biggest muscle, the heart.

MAGNESIUM FOR THE BRAIN

Cardiovascular effects on the brain include keeping the brain healthy and directly protecting the profuse amount of blood vessels in/on our heads.  However, there are HUNDREDS of crucial-but-microscopic functions going on which require magnesium too.  Here’s one reason people can have trouble focusing and paying attention (yes, it’s good for Attention Deficit Disorder):

“In the cerebrospinal fluid that bathes the brain and spinal cord, magnesium is present in higher concentrations than in the blood plasma.   Of the 300+ different enzymes in the human body that require magnesium to function, a great many are crucial to cerebral metabolism and cognitive function.  For example, magnesium activates glutamine synthetase, an enzyme responsible for converting waste ammonia—an extremely toxic byproduct of normal protein metabolism—into urea for proper disposal.  The ability to focus and pay attention can be compromised by even small increases in brain ammonia.”

I use the terms “raw cacao” and “raw chocolate” interchangeably.  The cacao bean grows in a fruit tree, in a band of the world around the equator.  It is natively from Central & South America, where it is referred to as “cacao”.  In North America and Europe, we grew up calling it “chocolate”, and as long as it’s RAW, it’s medicine, whatever you wish to call it.

Commercial chocolate is fire roasted and alkalized to reduce bitterness.  Next, many manufacturers replace the natural cacao butter with hydrogenated oils and add preservatives. Adding milk further reduces the effects of the raw cacao.   The once powerful medicine is now mostly dead, and the balance has shifted to be unhealthy.

NOTE:  The several thousand science studies on chocolate (see “Power of the Bean” https://www.acupunctureinfortmyers.com/the-power-of-the-bean/) use RAW cacao, not the processed, fire-roasted, heated, treated, chemically-preserved chocolate we can buy at the store.  That’s mostly dead cacao, and much of it contains more-bad-than-good nutrition.

WHAT CAN RAW CACAO DO?

I’ve seen people get off of medications as their tests required the doctors to lower the dosage more and more over time.  My mother got off her blood pressure meds, and she simply switched her sleeping pill for a raw chocolate at night!   I’ve seen people lose more than 35 lbs, get off diabetic meds, cholesterol meds, neuropathy medicines and more.  How?  With this ONE dietary change:  Eating a small amount of raw chocolate 3-5 times daily.   What I’ve come to observe, over the years, is that chocolate can help people–to a certain degree–even when they don’t make other dietary and lifestyle changes which would clearly be best for their health.

Here’s a High-Level List of medicinal uses for Raw Cacao.  Believe me, there are many, many more, but these highlights capture some of the big players:

“Talk to Dr. David or one of our Medicinal Foods Consultants at Lotus Blossom Clinic to find out if Raw Chocolate is right for you!”

Dr. David and Deb Martin
And all the Providers at Lotus Blossom Clinic
www.LotusBlossomClinic.com
239-277-1399

About the Author: admin