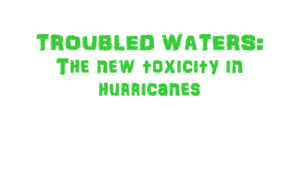 Hurricanes have been a fact of life in Florida for as long as anyone can remember…and thousands of years before.  Yes, we know the scientists are saying “the earth is heating up”, causing not just more storms but also more severe storms.  But there is something relatively “new” on the scene that’s causing death and destruction of sea life of all kinds.  Scientists are now telling us there is evidence suggesting that this destructive, toxic substance is also associated with human illnesses including cancer, serious respiratory […]